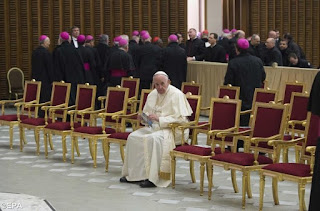 But the LORD is the true God; he is the living God and the everlasting King. At his wrath the earth quakes, and the nations cannot endure his indignation.

The Pope Francisco is not bad man. In his teachings he tries to be close to the Lord but through this, as everyone doing same, he is begin little bit alienated. Alienated, as the Lord is.

Recently he has made very remarkable words stating that Christianity is not a “religion of saying” that be its very nature must act for good. He has also observed that “God is real, too many Christians are fake”. It is true but is not this a fault of the Church itself?

It is nothing new In fact and the Lord has observed this many times before. The people, his people, was never seeking for God, never trying to understand Him (Rom 3:10-18) but nowadays it is a massive problem. And one of the reasons behind this is the false doctrine of idolatry. Is not said:

You must have no other gods before me.
Do not make an idol for yourself—no form whatsoever—of anything in the sky above or on the earth below or in the waters under the earth.
Exodus 20:3

And does not the teachings of some of so called Lord's priest, are in the direct opposition to this fundamental commandment? Is not teaching that the Lord is some old wise man residing in the heaven in the skies above the Earth a such idolatry. This makes the Lord an undefined power while he is a living God, living man. Living on this planet.

This is a bigger problem to understand. A fundamental issue inside not only the Catholic Church. Something that not only the Church must understand. You must change this, dear Pope and faithfuls, and better start acting now, if You want to save this planet from the Lord's wrath.
Posted by Kabbalah33 at 11:45 PM