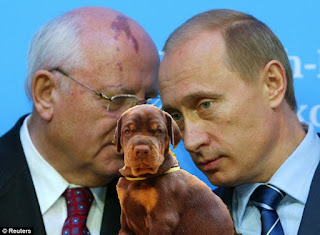 And there is hope in thine end, saith the LORD, that thy children shall come again to their own border.
Jeremiah 31:17

Yesterday RT.com published headline after which whole St. Petersburg has frozen. They blamed US for schizophrenia but did not they tough about someone else?

Some are all the time misspelling GOD and instead use phrase DOG. It is old idea, if the Lord keeps somewhere his secrets, let's make him, using latest medical achievements, a dog like creature. He will fetch us everything we want.

For troops and officers it is enough to not think about God's wrath. At the end they will make a Dog from God. How wrong thinking it is Michael Gorbachov, last Soviet's leader has proven.

After the Lord has been born, Soviets taken his father and made dog from him. While the Lord is still thinking if they did this for fun because it is hard to believe that they wanted Cold Fusion. Maybe was hoping for other inventions.

Anyway they did not achieved anything and they could not because it is protected. The state of Lord's mind is scanned and if anything is wrong with him he is refused an access to his nest.

Whole work has come to nothing but the people that was believing in the Soviet system has disbelieved after such treatment of the God. The empire has fallen and their children has come again to their own border. As usual in such situation.
Posted by Kabbalah33 at 11:51 PM