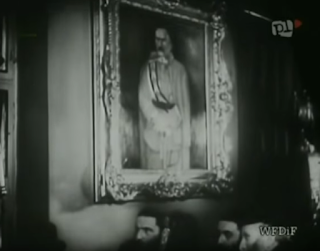 Keep balancing, as long, as possible and when it will be no longer possible You will burn the world.
Pilsudski saying

Józef Klemens Pilsudski beside being Marshal of Poland had very special meaning for the Jewish community. This importance was even underlined by the Nazis. They has put his portrait inside main room of Jewish Council in the Ghetto they has created in Warsaw, capitol of Poland.

Józef Klemens Piłsudski (5 December 1867 – 12 May 1935) was a Polish statesman; Chief of State (1918–22), "First Marshal of Poland" (from 1920), and de facto leader (1926–35) of the Second Polish Republic, Minister of Military Affairs. From mid-World War I he had a major influence in Poland's politics, and was an important figure on the European political scene.

He was the person most responsible for the creation of the Second Republic of Poland in 1918, 123 years after it had been taken over by Russia, Austria and Prussia. Under Piłsudski, Poland recovered Vilnius from newly born independent state of Lithuania following Żeligowski's Mutiny but was unable to incorporate most of Lithuania into the newly resurrected Polish State.