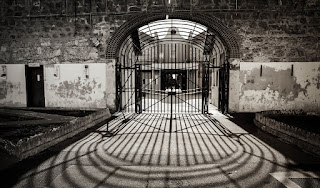 When the Lord Jesus Christ was prophetising this words about reasons of the final judgment he was not even imagining that he will be put into prison but it is not first such time. In modern days Kabbalah notes two such cases.
One time it was XVIII century Paris when the Lord has been imprisonment for acting against the Russian Empire. Another time it was beginning of XX century when the Lord has been sent on exile by Tsar to cold Siberian camp.


This time it happens again in 2012 in the heart of European Union. In Brussels, Belgium. But these days are over and the Lord has been liberated just yesterday. He has returned to his hometown, Poraj in Poland and is again ready to teach You mysteries of true faith: Jewish Kabbalah.
Posted by Kabbalah33 at 6:06 AM