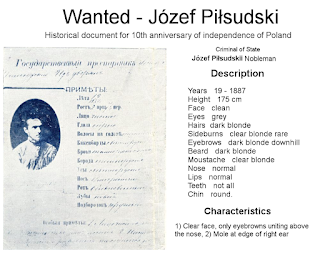 Life of Józef Pilsudski was not always easy. Before his Poland has regained independence after almost 100 years and he became the Marshal he was doing work of publisher.

But before this publishing work he has come under another threat made by Tsarists that together with Austria and Prussia was occupying his country. He has been accused of preparing assassination of Russian Tsar.

Before his capture and forced exile into deep Russia the Tsarist has prepared a Wanted Letter with his rare picture. This document was later printed on 10th anniversary of Polish Independence and thus I can present English translation of it.

What is is interesting in it is a Pilsudski characteristic. Second of it is 'Mole on the edge of right ear'. A special genetic mark unique only to Pilsudski family. A family of 12 brothers and sisters that was later completely slain when the Soviet Union has invaded our country on 17 September 1939.
Posted by Kabbalah33 at 12:55 AM