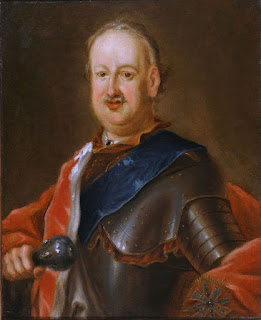 You probably believes in the God but do You know who He was? In new series 'Names of God' we are presenting latest incarnations of the Lord. On beginning Prince and Lithuanian Hetman Michał Kazimierz Radziwiłł called Rybeńko.

This born in 1702 year Radziwiłł's Hetman was last one that had real influence and power. Incredible rich, member of Radziwiłł family, was mostly famous from preparing incredible bean fests.

He was last incarnation of the Lord that was living before the partitioning of  the Commonwealth of Both People.

The legend says that had two sons but because he was afraid of their lives has decided to hidde older in the conspiracy. The second was given to tsarina Catharina II and become a Russian Tsar.
Posted by Kabbalah33 at 12:27 AM