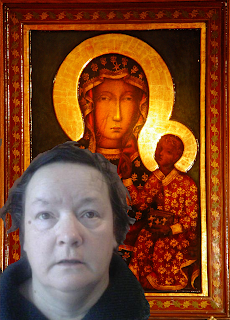 So the sons of Levi did as Moses instructed, and about three thousand men of the people fell that day.
Exodus 32:28

The Malta's plan has been foiled and the Lord has been liberated from prison earlier. Instead of cold German's blue eyes he has perceived golden ones of his true mother – Our Lady of Jasna Góra.

However, she is not only one that have blue eyed replacement waiting in darkness to enter the stage. This satanic force is dangerous not only to political leaders they are intended to replace but to whole world, as previous toss has invoked the Holocaust and World War.

Thus, listen to the Lord, God of Israel. Nobody who puts a hand to this plot. Nobody who helps them or neglect his own duties will be safe from the Lord wrath. Nobody will escape, even on another planet. There is no place to hide from the Lord eyesight and they can be sure that God's hand will hit them like cometh the Earth.

Sons and daughters of house of Levy are gearing up on whole globe, as satanic powers do. With time we will be able to crush everyone that made evil to the Lord, family and friends.

Everything for the sake of God's blessing to the Earth. And, as in times of the Bible, for the stake of Lord's blessing they will be ready to sacrifice thier fathers and brothers not to mention friends and coleagues.

Do not sign up to the Malta list. Even if they would beat the Lord at the moment, Maltan forces are for sure doomed just, as this planet could be.
Posted by Kabbalah33 at 12:12 AM