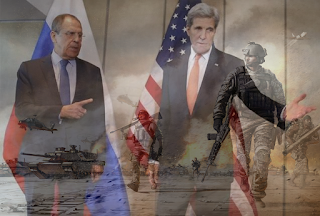 The world is gearing up for Security Conference that will be held in Munich, Germany. The conference will be focused on Syria but just today Russian PM Dimitri Medvedev was talking not only about permanent conflict but also raised a question of possibility of next world war.

"All sides must be compelled to sit at the negotiating table instead of unleashing a new world war.", said Russian PM. Maybe his inspiration is coming from growing concerns of possiblility of another nuclear deal. The prospect of handling Cold Fusion technology is real but the Lord is not forgetting about his followers in oil producing countries like Russian Federation, Saudi Arabia and Iran.

To be clear before this ground breaking invention would be given to the world the Lord is expecting series of wonders from the Western world to happen. Soon he will present 10 points plan to the public. It is matter of not only money but certain progress he want make on this planet.

From the other hand prospect of giving Cold Fusion is not simple. Unfortunately polish government did not prepared well and access to the place where Lord's keeps this invention is still blocked. This makes a real possibility of Russian interference and open war in this part of world.

The Russian that based their businesses on the oil and gas income can be desperate but the Lord will open his hand also to them. Having in mind all this evil that comes to him from the West he is also looking to the East and is open for negotiating zith current ratoional Russian leadership an agreement that will postpone granting Cold Fusion. All options are on the table, also a world war that we all would like to avoid.
Posted by Kabbalah33 at 11:50 AM