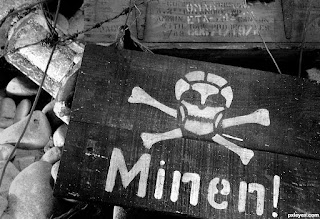 You can wonder if the Lord have really in his possession the Cold Fusion invention why he did not already gave this to the world. He could then become incredible rich.

The answer is not simple. For first it is not said that the Lord will give this technology to advance mankind. After years of eastern and western oppression he is rather going for another time to sent waters of deluge to the Earth.

But even if he would be willing to share with it, the problem is technical one. It is matter of access to his nest, a place where Lord keeps his secrets.

Just before the Nazi was forced to retreat from the Lord's land they has mined his underground to make site inaccessible to him. It is big problem but the Soviets has found an idea to make a lake on top of this underground site so water will disarm mines.

The decades was passing but nobody was interested in this access. The Soviet Union, as nowadays Russian Federation was heavily based on oil trade with the West and was last to be interested in miracles of the Cold Fusion.

However the lake stayed same even after fall of the Communism. There was one attempt in the 90'ths to remove water from it but it was stopped by... ecologists that claimed that after such move it will be a catastrophe to the region.

Now it will probably take one year to remove water and prepare the site for the Lord access but such a move would provoke strong reaction from the Russians that would immediately make invasion on Poland to stop the world from getting the Cold Fusion.
Posted by Kabbalah33 at 12:24 AM