The Order of Malta 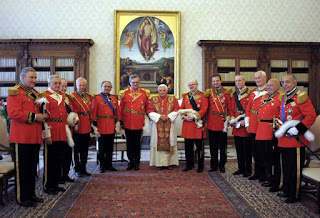 The Lord has been liberated by his powerfull Allies but time for them is critical, as soon they can be replaced by the Satanic forces. Having this in account the Lord has decided to address his bigest opressor directly. Read Lord's letter to the Order of Malta and have better understanding of hidden world of not so Jewish Kabbalah.

Dear Grand Master of the Order of Malta,
I am addressing You directly, as one of persons that have deep understanding of the Jewish Kabbalah.

Since centuries Your order is executing same script that is driving force behind events surrounding the Lord, his family and closes friends. The events that are very evil and twisted in their nature.

In the middle age fashion You are replacing Lord's allies and relatives by blue eyed, dehumanized monsters from inner-circle of the hell. This satanic force and the Satan – God's clone – is driving force behind misery and despair of millions. It was driving force behind the Holocaust that has devastated completely Lord's land and whole European continent.

Thanks the God or rather his Allies we are now in the moment when these infernal paws has been not yet installed. The plot with Lord's imprisonment has been broken and the Lord liberated. He has returned to his hometown and by his presence is protecting his mother. The Mother of God of Jasna Gora.

You can imagine that by changing her into those of house of Germany, Teutonic one, You will make a deep harm in his hearth. It is dangerous not only because, unlike often in the past, the Lord has also deep understanding of the Kabbalah but also because it is time close to his Judgment Day. A day of judgment is coming and it can be a last one. The Final Judgment.

The Lord is looking on his land so devastated by the Shoah and finds himself alone and alienated. Unlike his grandfather he does not have his closes people – the Jews – around himself. But ironically it means also he does not have to care of them anymore.

For that reason he thinks not only about bringing for another time a deluge to the Earth but also about leaving it for another one. The Earth is not unique in the Universe and he can start building new Semitic civilization somewhere else.

Everything is at the stake and You must understand this. Situation of the Lord is dramatic and Your script is not going to change it significantly. You are going to kill and replace his closes Allies and thus this You are going to destabilize it even more. Something that could come to be unrepairable.

It is rely stupid, as the Lord is considering if mankind shall be given invention of the Cold Fusion. Technology that for another time could improve live of billions and would help to stop dangerous climate change by reducing significantly emission of CO2.

However, on the other hand, it would make industrialized countries no longer dependent on the oil and gas. It would mean then end of fortunes of many. Thus it is critical change for those countries that made their budgets on the export of this resources.

The satanic powers You want to install for another time have a goal of partitioning Lord's land and undermine his influence over the people lives. They has proved this many times in past.

This is effort that will hit good ground and will be for another time successful. Foremost I have in my mind the Russian Federation that for the stake of their oil industries will certainly invade Lord's land to effectively block him from giving the Cold Fusion to the world.

Please, before You will order this replacements think lite bit on possible effects of it and the Lord's reaction. With his powerful hand and sons and daughters of the House of Levy that are building up all over the world he will be soon able to hit anyone involved in this process. Nobody is safe, dear Grand Master.

Sincerely Yours,
the Lord