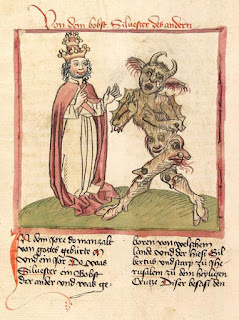 This time Lord is addressing His Holliness Pope Francis. More that 1000 years has passed from last direct meeting between this two and the Lord want to play again a game of dices not only for the World's End but maybe for the Cold Fusion.
Poraj 28.II.2016

Dear Excellency,
Dear Faithfuls,
More that 1000 years has come since the Lord has played his dices with the Pope Silvester II but the feeling of coming of the end of the world must be in Your heart, as big, as at that time. More that 1000 years has passed, since the Lord did not had a direct meeting with Your Excellency but once again he is wanting to sit down to the table, even, if later You will call him a Satan.

The stake once again is high. The wrath of the Lord was never, as high, as nowadays but there is also something positive, some hope in this situation. Something we would maybe like to offer to the mankind. This time it is not mathematics, medicine or astrology advances but the Cold Fusion technology that maybe the Lord would be willing to give You. We could play a game of dices for it.

However, after years of oppression of his grandfather, father and himself, the Lord is rather thinking about departing from this planet and sending it into waters of the Deluge. The status quo was never, as bad, as now and Your Holiness must understand this very well.

This hundred years since the last Judgment of the Lord stay under the mark of the Holocaust. A nightmare that has forever changed this world and the Lord's land. As his grandfather, the Lord lives nowadays on the true desert where he cannot find anyone that would like to understand him. The Lord was always alienated but current situation was never, as bad, as after the Holocaust.

The Lord while making his Judgment will take under his considerations not only his personal experiences but also experiences of his forefathers and closes people: the Jews by birth. The ones that has in practice almost vanished forever.

Nothing has been done to change this situation and the Lord observed only oppression of His person. Something that would be very hard to forgive.

You and other world leaders do not change this situation. In face of the Judgment that this time for real can be true Final Judgment there are no real efforts undertaken. You are limiting yourself only to words and empty gestures and while they are even nice they are not going to change the status quo. A real actions must be undertaken to convince the Lord to not destroy this fallen civilization.

That is why the Lord is coming with not only a proposal for groundbreaking meeting but also a short lists of things, a miracles, that must happen if the Judgment would be positive for You and Your people. The time is only 17 years and there is a lot of work that must be done before the magic year 2033.

The Miracles of the Lord