Kaczynski on the march 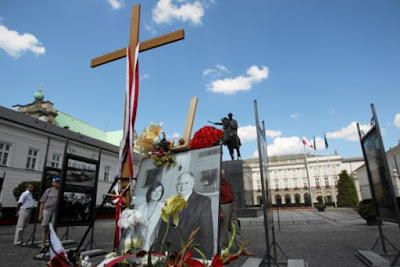 The ruling PiS does not care about the Lord instructions regarding his Judgment and is building up their Smolensk cult. Everything happens with silent consent of Europe.

Next month they will be marching in Warsaw on 6th anniversary of Smolensk. Will they do it in the rhythm of Horst Wessel Lied? Maybe not officially yet as leader of PiS party Jroslaw Kaczynski seems to understand how grave is the situation.

But on bottom of the party it looks much worse. On location of this unusual gathering PiS has chosen front of the Radziwill palace. A palace that must be handed back to the Lord before the year 2033. 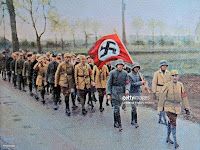 They has stated that the Poles has chosen their place and it became symbolic. Truly for the Lord is a symbolic place and symbolic gathering. Same his forefathers observed in bordering Weimar Republic nowadays on the front of his forefathers palace.

The Lord before making his ruling in 2033 will weight up the people souls to check how deeply they has been eroded by this open Nazism. The situation is catastrophic as on the question if Smolensk monument shall stand on front of his palace almost 50% of Poles do not have a problem with this. It seems for the Lord that millions are again looking with the hope maybe not on Swastik but on Smolensk cross.

For Kaczynski that has come to power in effect of this Smolensk Revolution the situation seems to be hard. The Revolution likes to eat their own childrens and it can become a case here. He must straddle between the cult of his fallen Brot and the possibility of negative Lord ruling on effects of it.

Soon, Kaczynski can start to be a problem for his party and this Smolensk machinery and it can happen in the coming months that his top aide President Duda will take away his Order, Order of Malta from Jaroslaw.

The next manifestation can be held under real swastika without any efforts to easy the situation. Real Horst Wessel Lied march in the dawn of Kaczysnki blue eyes.