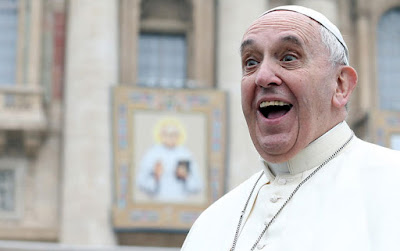 During the recent meeting with variety of religious leaders Pope Francis has claimed that there is "No God of War". This is in direct contradiction to what the Bible and the Lord has spoken through the ages.

He did this but he did this in purpose not in blind aggression. He did this to punish those that stopped to listen to his voice and stopped to obey his commandments praying to false idols, false gods.

At the end he has said to the Prophet Jeremiah:

“The prophets are prophesying lies in my name. I have not sent them or appointed them or spoken to them. They are prophesying to you false visions, divinations, idolatries and the delusions of their own minds.

Therefore this is what the Lord says about the prophets who are prophesying in my name: I did not send them, yet they are saying, ‘No sword or famine will touch this land.’ Those same prophets will perish by sword and famine.

And the people they are prophesying to will be thrown out into the streets of Jerusalem because of the famine and sword. There will be no one to bury them, their wives, their sons and their daughters. I will pour out on them the calamity they deserve."

The false prophets or visionaries who try to lead you astray must be put to death, for they encourage rebellion against the LORD your God, who redeemed you from slavery and brought you out of the land of Egypt. Since they try to lead you astray from the way the LORD your God commanded you to live, you must put them to death. In this way you will purge the evil from among you.