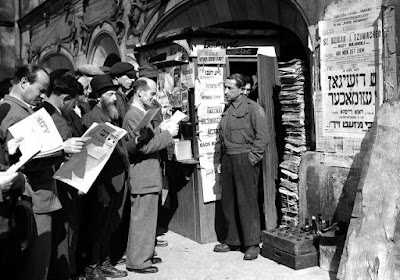 When Lord was in the Netherlands he has meet some powerful lady but when asked for help she declined saying 'Your people was slain and we do not want to share their fate”. Remarkable and honest words made on the occasion of Holocaust commemoration.

That is true, the Lord people has been slain almost century ago and that has changed the Earth into non habitable land and that is why the Lord is looking into the stars to find another planet and recreate the Kingdom lost here.

The rulers and common people did nothing to compensate Lord looses and it is something that is not going to change. How to compensate it, someone could ask. The people that was living on Lord's land are not going to be resurrected here. That is true. But once they can return with Lord power on the another planet.

Netanyahu, leader of Israeli that Lord's does not respect so much as true, racial, Jews that he has lost here said that 'we must be ready to defend our-self' that is true when it comes to him personally. Malta Order do not feels human feelings. Have no understanding that it is after actually. The Lord's people has been slain and he has been destroyed to the ground.

In their sadistic manner they are preparing new wave of extermination. Beginning from the top leaders to the smallest. That is something that we will be observing in the coming decades, as once Lord grandfather was doing.


Lord does not feel bad about this Dutch lady that opened this posts but you must also feel not sorry once he or his son will live this planet, forever. To fund another Heavenly Kingdom somewhere in the skies. Because this one that he had here is not existing since century.
Posted by Kabbalah33 at 5:13 AM