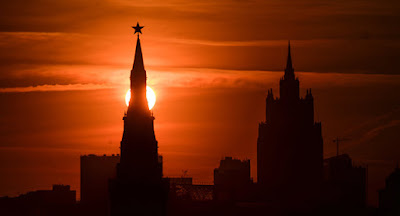 And there is hope in thine end, saith the LORD, that thy children shall come again to their own border.
Jeremiah 31:17

In Poland we say ‘Poles are smart after the harm’ but in the context of Peskov it shall be said but ‘Soviets are stupid before and after the harm’. It was Mikchail Gorbachev that has closed LORD father in psych-pushka and soon after his Empire collapsed. Just as it was predicted in such situations in the Holy Bible.

What is however interesting the wording of presidential spokeperson is in direct contradiction to what Putin has said. Soon after getting known that LORD will be participant of high level EU-Russian economic forum he has said that they will be using peaceful ways to defend their interests.

The forum will be held in October and it is better for all of us if Putin was more serious that his spokesperson. Otherwise we will quickly come to the situation that only way to defend Russian huge interest in export of oil and gas will be on the battlefield.

It would be better for the Russians to more beware on words and come to real action in supporting LORD quest to rejoin his lost Son.