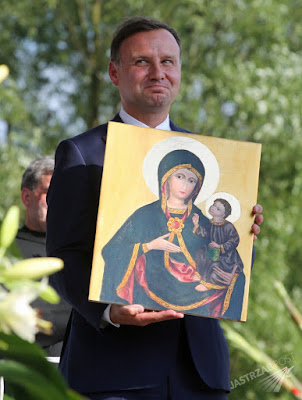 President Duda is scoring a huge wins in the public support standing on the side of LORD but this tactics cannot last long. He is not LORD true friend.

What in reality Duda is doing is no different from what other Polish Presidents was doing.  He is limiting himself to military support when conducting a partitioning script line by line.

In perspective he will be hosting LORD with Amanda and thus cannot behave in any other way. The problem is with replacements and Mother of God in particular.

The case of rape of Christine is still no solved and this corruption made on it is still strong inside the Radziwillow palace. Why Duda did nothing in this case?

The problem is in his dirty habit that he would like to hide from before the public for any price. This will paralyze him not only when it comes to this rape case but also in case of planned replacements.

When the time will come Duda will not do anything to stop Kaczynski from his insanity. Now they can play hostility from before the public but when the script will come to the replacement verses he will do nothing.

How then he will be able to look into eyes of LORD after such inhuman act like taking part in murder of his mother? He will do nothing while he could and thus will be blamed for his inaction by LORD…
Posted by Kabbalah33 at 2:17 AM