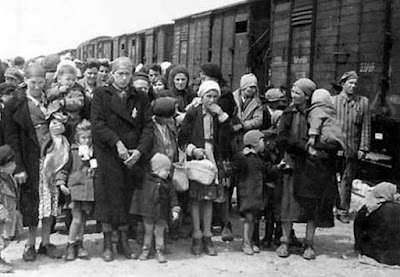 Yesterday Father Rydzyk organized a meeting of Poles nad Jews. Kaczynski was a honorary patron of this event. It was spite in the LORD face and the memory of those that lost their lives in the Shoah.

Before the war such Fascist-Jewish meetings was also not uncommon. Many in Palestine was dreaming of the resurrection of the Jewish Statehood and was looking towards Hitler as the Savior. The history has proved that they was very wrong and acted against themselves.

But the land has been already cleaned from the Jews and the situation is different. Those that attends such meetings does not feel that they are very wrong and are legitimizing fascist dictatorship.

What LORD can do in such situation. He again looks into the sky. This is true that once in his Nest he have a power to resurrect anyone he wish. And he dreams of resurrecting his nation. If not on the Earth then maybe on some other planet. A Jewish Planet.
Posted by Kabbalah33 at 3:29 AM