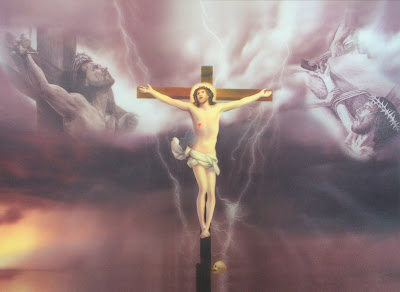 Figure of Jesus Christ is controversial not only to Jews and Muslims. Also LORD have some doubts about him.

It is not matter of if he was Son of God but rather if he was Messiah. Why? Because if he was so Jews could not crucifix him if they would do such thing they according to New Covenant would stop to be a Jews, forever.

Such killing of the Messiah was only possible if he have a Son. Did then Jesus had a son? Some claim that it was a case with Maria Magdalena.

The other possibility why Jews has executed him could be his origin. As we read in the Bible his origin was not natural. Possibly it was a kind of semi in vitro.

If yes then the rest of the New Testament would be a lie. Jesus then was not a Saviour. Psychically he was missing a mole on the edge of the right ear but yes still could be a Son of God...
Posted by Kabbalah33 at 9:16 AM