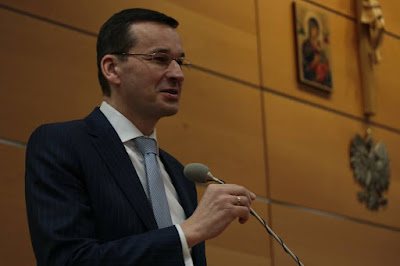 Morawiecki would like to be named a Polish Patriot but a party that he is public face is not Polish in the nature. It is ruled by Maltese Order and have everything to name it a fascist.

It will be no long time before Mateusz will resign. The deadline for Maltese Order in their satanic plan is May, 2018. The moment of re-election of Vladimir Putin on the President of Russian Federation.

From that point in time another cycle of ancient Scripture will be blindly executed by Malta Order and some of the world leaders replaced by their clones. We will all observe a monumental work done by the Order and establishment of new/old Fascist/Bolshevik World Order.

That would be certainly not a problem for Morawiecki if not a direct changes in the LORD family. The Mother of God will be replaced by her Teutonic clone and this is a point no Polish Patriot can accept. It will be too heavy blow for Morawiecki and some other leader will be needed to take up the steer. Until the end. Until the dooms day...
Posted by Kabbalah33 at 3:30 AM