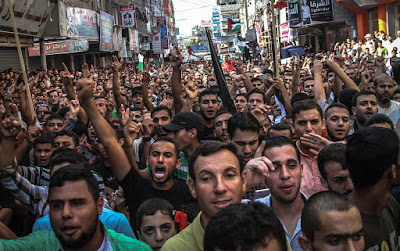 In first hours of the plebiscite nobody voted. Lord was expecting that Jews and Israeli will not vote seeing there is no such need but what to say about so oppressed Palestinian people?

The truth is nobody believes in him. The world, after Holocaust, has been completely taken over by the atheist and deists ideologies and people if declares to believe, they in best case believe in some super power - old man in the heaven.

The Lord has created nation of Israel and the Lord have the power to dissolve it. But what to say if nobody, including those that shall be most, is not interested in that.

This is dark world that need to be destroyed so some other, more brighter will be born on another planet...

The Lord have enough of the Earth. He has so far focused on Israel and feels he lost a time. Then he has offered his helping hand to the Palestinians - but it was rejected.
Posted by Kabbalah33 at 2:37 AM