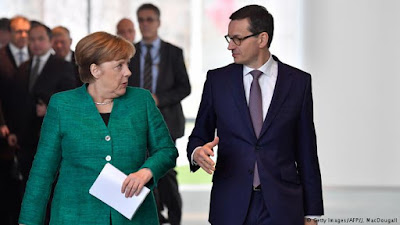 Today Germany Chancellor Angela Merkel visited Poland. It is kind of farewell trip, as he has announced her resignation in 2021. The Lord welcomes this, as a sign of the end of age of hunger, starvation and political repressions.

This event can also means end of Morawiecki time as Polish PM, as his position has been severely damaged by two recent court rulings claiming he has told a lies during local election campaign. In the eyes both leaders are total failure bringing your civilization to the edge of collapse.
Posted by Kabbalah33 at 7:49 AM