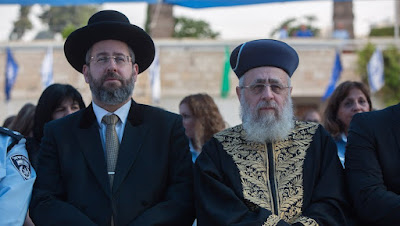 He that is born in thy house, and he that is bought with thy money, must needs be circumcised: and my covenant shall be in your flesh for an everlasting covenant.
Genesis 17:13

Avigdor Lieberman raged against top Israeli Rabins David Lau and Yitzhak Yosef after DNA test proved they are not of Jewish blood.

While Lieberman is also not of Jewish Race what the Lord sees with the naked eye, the Lord underlines that both Rabins are Jews.

The racial aspect is important only in the context of the race that has been in practice erased from Europe due curse of the Holocaust. Not in the sense of beign a Jew. Otherwise Israel would never become a state - as most Jews there are converts not Jews by Birth.

The only obligation from the true Jews that Lord is requiering in the Holy Bible is circurcismon of the men. A circurcismon that is the sign of the everlasting covenant with the Lord. About what Lieberman so often is forgeting.