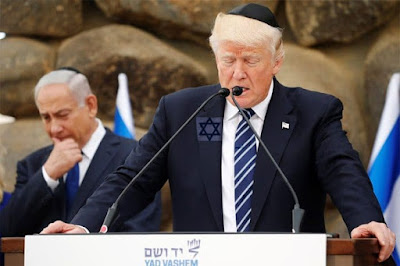 During his stay in Israel suggested that the Lord has raised Trump to be a saviour for the Jewish people from the menance of Iran. Yes, the Lord favored Trump over Clinton but only beacuse the last one would mean continuation of Obama policies: hunger, starvation and prison.

But it is not said the Lord will continue to support Trump as during his reign nothing has been done. Even single point of his Manifesto has not been realized...

1. The palace in Dobrzyca and Radziwiłł's palace in Warsaw must be handled to the Lord for his headquarters.
2. The Lord must return to his original Radziwiłł name and his family must be fully compensated a loses since the time of partitioning of the Commonwealth of Both People.
3. The Saski's palace and the Grand Synagogue of Warsaw must be rebuilt by the Germany nation. Germany and Russia must compensate the Polish nation a II World War destruction. The special fund for the restoration of Jews by birth must be established.
4. The Israel must acknowledge the Lord personally and pay an annual contribution for their rights to the Holy Land.
5. Lord's father must be acknowledged, as the victim of the Communism and the truth of Lord's forefathers announced to the world.
6. The Catholic Church must stop idolatry's teachings that the Lord is some unknown super-power residing in the skies above the Earth and the original doctrine of God begin a living man must be reintroduced.
7. All the places and monuments that recall so-called Smolensk catastrophe must be removed from the surface of the Earth.
8. The King of Belgium will make a public apology for his treatment of the Lord when He stayed in his Kingdom.
9 Permanent and ancestral position of the High Commissioner of UN Security Council will be given to the Lord