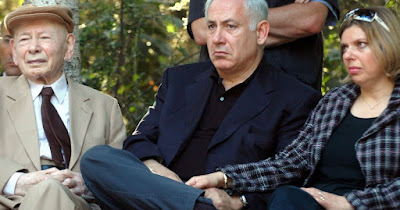 After Golan Height declaration Gantz brown shirts does not have too much chances to win the elections. He was for moment King of Israel and Bibi was much panicked of that but after such insane move against the Lord Gantz has lost the trust of the nation.

What we can then expect from Bibi? Mainly same passive policy towards the Lord that we have observed through past decade. He will be assing you - showing pictures of all Kabbalah ladies: Nina, Amanda, Christine and even Raga twins.

The problem is that for the Lord it is not enough. It's simply too little too late. He have bigger ambitions that that. He has proposed a complex 9 points Manifesto that nobody has picked up.

IF THIS MANIFESTO WILL BE NOT REALIZED THERE WILL BE NO SALVATION FOR THE PLANET EARTH.

Moreover, before the Script will take off and the Lord will finally join his ladies - they will murder and replace his Mother. THIS IS POINT OF NO RETURN FOR WHOLE CIVILIZATION.
Posted by Kabbalah33 at 8:29 AM