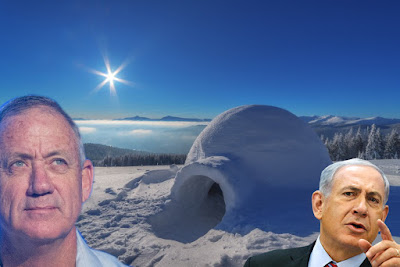 On the same time, the attack has come from both Benjamin Netanyahu and Benjamin Gantz. In the unusual (we shall get used to that) manner they ordered their followers to take the Lord to modern gas chamber - psychiatric hospital.

"PM thanked Samona president for support in international forums", you could read on the front page of Netanyahu Jerusalem Post. While on Gantz Haaretz you could read a statement that he "will work with anybody who is Zionist and sane".

Both statements came at the same time together with ambulance designed to take the Lord to the House of his Father.

Khamenei had a lot of fun, not only because gassing the Lord out - they have dissolved their nation, as the Biblical orderal made by the Lord thousands of years ago and enacted in the Holy Bible has departed from before him.

Khamenei surly remebers that same thing Ayatoylah Khomeini did to Lord father - dissolving not the Jewish nation, as the Father had already an offspring but dissolving the Soviet Union - dissolving their morale at least...

The Lord will, however, make Khamenei humor worse. Whatever he says in the Lord eyes his regime is no different from that we face nowadays in Israel. And if whole things will follow in this same manner, whatever if you vote Netanyahu or Gantz they will lead you to the same. Not to the synagogue on Temple Mount but to the igloo...