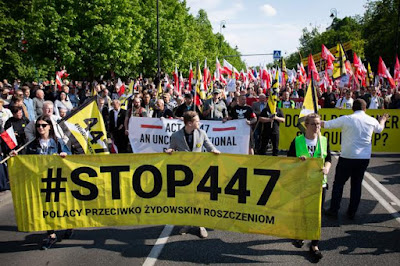 For the promise to Abraham or to his descendants that he would be heir of the world was not through the Law, but through the righteousness of faith. For if those who are of the Law are heirs, faith is made void and the promise is nullified; for the Law brings about wrath, but where there is no law, there also is no violation


There is a big fuss in Poland after Congress has voted on law 447. Both sides are partially right. Jews because they want restitution for stolen Jewish properties as the consequence of II World War and so-called Bierut's decree. Poles because they do not respect foreign Jewish organizations.

The truth is that the Jewish nation has a mechanism to deal with such a claim. It is the Lord who is the biblical heir of the nation. But do they invited him to talks?

At the same time, Israeli wanted to send their delegation what was rejected by our Pinocchio. In response, Poles said that they want 1 TRILLION dollars from Germany. Well, both sides of the equation are partially right but until they will stop ignore the Lord the equation will be unsolvable.

And they need to do both reparations from Germany and restitution from Poland if they want to survive the Lord wrath. The time is running out, as the patience of the Lord.