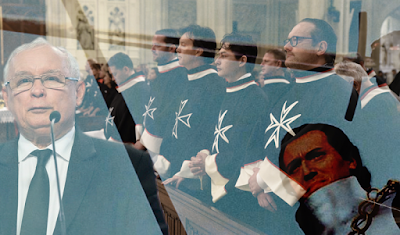 It is a mystery open that Lech Kaczyński and many of members of the ruling Polish party was at same time members of The Order of Malta. The same Order that has to lead to the Partitioning of Commonwealth of Both People.

Today, by the hand of Kaczynski twin they are ruling over the land of the Lord and there is no hope that the opposition will beat them in the coming election. The Order is buying Poles by the social-economic programs, in the same manner, that national-socialist was buying German votes in the time of Weimar Republic.

The Order has their Holy Scripture and sneaky way of dealing with the Lord. The opposition has nothing and is simply ignoring the Lord. The outcome. Well, Teutons was the Order of Mother of God but of the House of Germany. A degenerated clone of the original Lady of Jasna Gora...