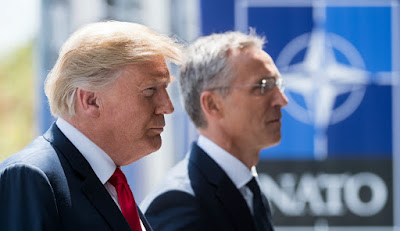 What have in common elites in Warsaw and Brussels? The answer is clear for the Lord. The first has raped his loved one Christine, that now they are hiding in Denmark, the other one has committed rape on Ms. Bonaparte that later has executed almost on the eyes of the Lord.

Is not this biggest secret of NATO for what Mr. Stoltenberg was advanced on the Secretary of NATO alliance?

Both rapes were a Malta Order occult rite designated to plant corruption in the highest institutions of the Western world. For both satanic acts, they accuse the Lord claiming to have a video recording of him. The truth is that it was his clone - Satan - and viewers can easily recognize that by looking in his BLUE eyes.

That is no longer a secret, as the Lord has written about that detail many times. So the Polish readers shall be not surprised that when another wave of false accusations has come out straight from Mr. Stoltenberg desk the Polish media published a headline "The are identical. Will, any of twins pay for the death of Angelica?".

The answer is that as long as the highest position will be in hands for somebody directly involved in both rapes in Warsaw and Brussels they will not pay. But the day of the Judgment is coming and it is only a matter of time, Mr. Stoltenber and other Malta paws will do.