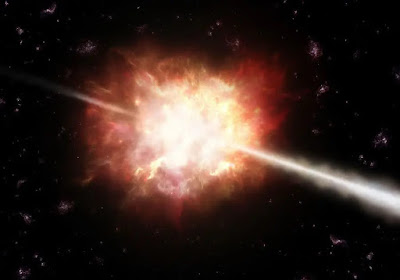 Today many readers could notice an article on the front page of Jerusalem Post in which some Hebrew Profesor decoded mechanism for a gamma-ray burst from the space. The Lord wants to dedicate it to all of you that belives not in GOD but into DOG. A dog that will contribute them a secret of the Cold Fusion.

Yes, with it on the Earth could be like in heaven. But you can forget about that to happen in hundreds of years to follow. The Earth has proved that is not ready for such advancement and from the other hand the Lord is afraid it will destabilize a space security mechanism.

But what that Profesor wanted to say, while he could not. The fact that the upcoming Judgment will be the Final One is almost certain and many shall appreciate the wisdom of Talmud that states it will come in no more than 6000 years since the creation of this civilization. The main reason behind such calculations is the desolation of the planet that is progressing with every cycle of the Scripture.

That is a well-known fact among Jewish scholars but the life has written another unpublished chapter of Talmud. A chapter in which the Lord is not simply sending a giant meteor to hit the Earth and make the Deluge on it but is departing from it forever. Departing to some other Earth-like planet where he will build a much better civilization not endangered by the Scripture.

And here are coming the revelations of our professor. The Lord will not confine on the Deluge this time. To secure the well being of new civilization somewhere in the sky he will send from it a gamma-ray burst that will destroy the Earth changing it in the planet like Mars, forever.